In September 2018 the first Historic Oregon Film Trail sign was installed in collaboration with Oregon State Parks in Gleneden Beach SP. The sign celebrates the 1971 production of the Paul Newman film based on Ken Kesey's novel "Sometimes a Great Notion" which filmed on nearby beaches and at a house on the Siletz River only a few miles away.  Unfortunately, this sign was vandalized and stolen in early 2021. 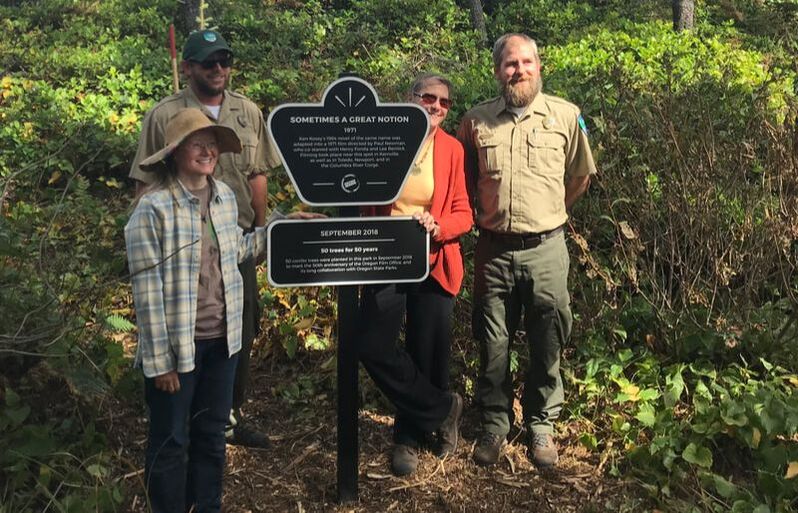 In December 2018 and January 2019 the first small group of signs was placed in various spots around Astoria to mark and celebrate the productions of "Short Circuit," "Kindergarten Cop" and, of course, "The Goonies." One sign in particular is positioned at the East End Mooring Basin near the Astoria Riverfront Trail to give an alternative view of the “Goonies House” in an effort to eliminate trespassing on the hill of the privately owned residence.  While the sign signifies a location for that viewpoint, the sign copy shares information about the nearby Astor Elementary School which was featured in "Kindergarten Cop."  The lesser-known Alameda Park offers a great viewpoint of the Astoria-Megler Bridge and it is the topic of the "Short Circuit" sign located there.  The sign for "The Goonies" is located by the Oregon Film Museum and speaks to it and the Flavel House’s roles in that film.

In May 2019 three more signs were placed in Brownsville to recognize the filming of Rob Reiner's film adaptation of Stephen King's novella "Stand By Me." Through a partnership with the Lane County History Museum, The City of Brownsville, The Brownsville Chamber of Commerce and Lane County Parks, the signs were unveiled at the Museum, City Hall and Pioneer Park - the latter of which was the filming location of the infamous blueberry pie eating contest where more than 100 local residents took part as extras. The City Hall sign also occupies a space just yards from the spot where Verne found a penny in the road at the end of the film - a cinematic event commemorated by a penny permanently embedded in the roadway. 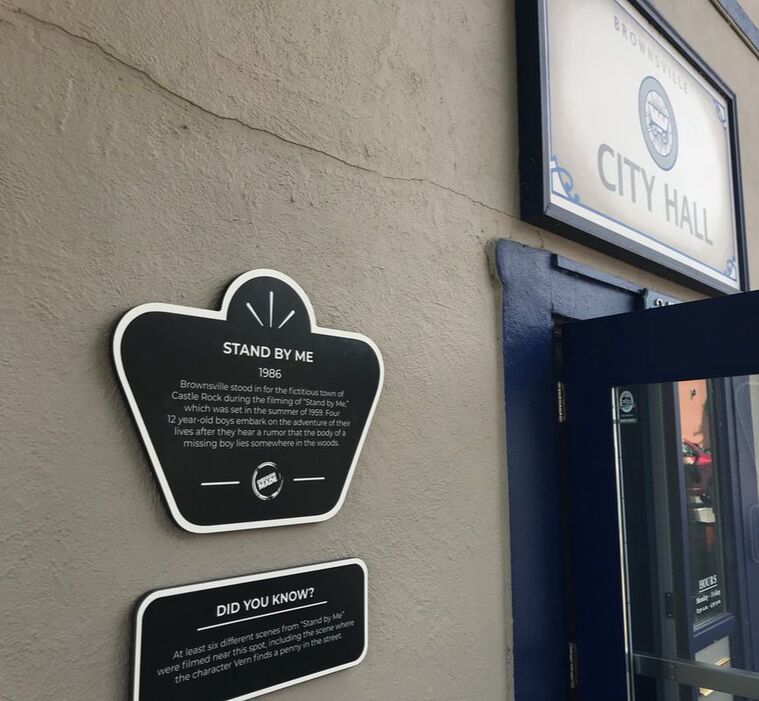 In July 2019, in partnership with the Astoria-Warrenton Chamber of Commerce, the City of Warrenton and the Oregon Coast Visitor's Association a sign was placed at Hammond Marina next to the breakwater where the Orca Willy jumped to freedom.

Two Oregon Film Trail signs were recently placed honoring Salem’s starring role as a location for “One Flew Over The Cuckoo’s Nest."  The signs mark two different filming locations related to the now classic feature film and feature facts and anecdotes about the film. The signs were unveiled at the Oregon Museum of Mental Health and the Salem “Dome” Building (currently occupied by the Oregon Department of Corrections) in October 2019, marking the end of Mental Health Awareness Week in the United States. Partners include Travel Oregon, Erik Andersson, the Museum of Mental Health and Travel Salem.

Two signs and a map panel that were installed in October 2019 to honor Ecola State Park’s starring role as a location in Twilight, Point Break, The Goonies and Kindergarten Cop. The signs feature facts and anecdotes about the films. Some visual cues have been added to the map panel and they link Astoria and the north coast to the Ecola locations, to encourage visitors to travel the Trail to see other areas.

A new Oregon Film Trail sign was installed in December 2019 in Depoe Bay harbor.  The sign honors the town harbor’s starring role as a location in One Flew Over The Cuckoo’s Nest.  The Oregon Coast Visitor's Association, Depoe Bay Chamber of Commerce and Travel Oregon partnered to bring this newest sign on the Oregon Film Trail in the World’s Smallest Harbor – between dock 1 and 2. This sign was made possible, in part, by a grant from Travel Oregon and the Oregon Coast Visitors Association. 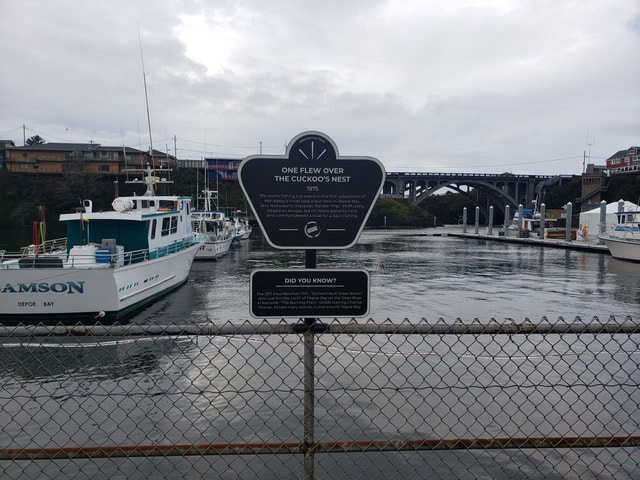 Another Oregon Film Trail sign was installed in June 2020 at the Gem Theater in Athena.  The dedication of this sign is celebrating the local filming of F.W. Murnau's feature film, "City Girl," a silent era film that starred Mary Duncan. Duncan spent several weeks in and around Athena shooting the farm scenes that were shot at the top of Thorn Hollow (approximately 6 miles from downtown Athena). Many local crews and livestock were used in the harvesting wheat scenes during the summer of 1928. This sign was made possible by a grant from Travel Oregon. 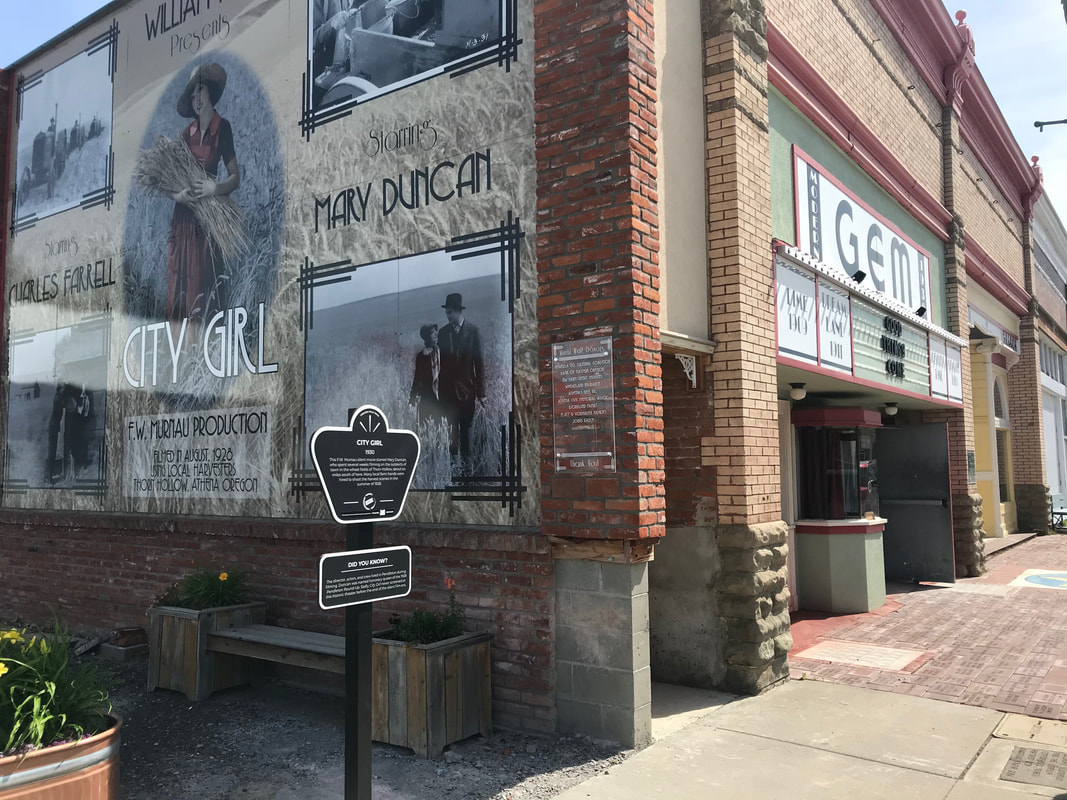 Installed in August 2020 at the Howard Creek Trailhead parking lot near the campground utilizing a grant from the Willamette Valley Visitors Association, this sign marks filming locations related to the popular romantic vampire fantasy feature film, "Twilight," that was based on Stephenie Meyer's novel of the same name.  The film was directed by Catherine Hardwicke, starred Kristen Stewart and Robert Pattinson and was the first film in this popular saga series.  Other films have used Silver Falls State Park as a filming location, such as the William Friedkin thriller, "The Hunted," the horror movie, "Just Before Dawn" and the opening scenes from Warner Bros. animated feature, "Yogi Bear." 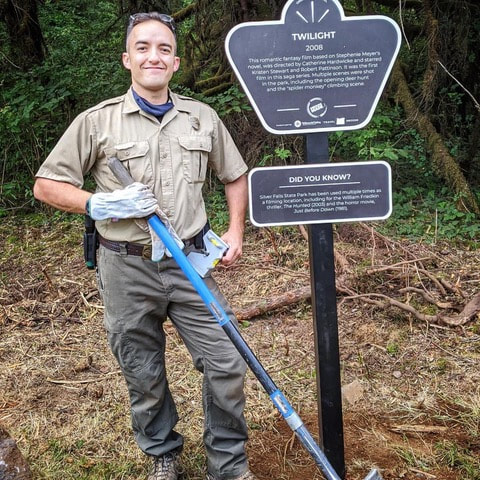 A fictionalized version of Ashland provided the inspiration for the setting of the animated feature film Coraline, the first stop-motion film from Oregon-based Laika Studios. Adapted from Neil Gaiman's novella of the same name, the film tells the story of Coraline, a young girl living in a small and charming town, complete with a Shakespeare Festival that permeates the culture and wonder of the community, who finds a door leading to a parallel reality.

These signs are a collaborative effort, paid for in part by a grant from Travel Oregon and a grant from the City of Ashland facilitated by Andrew Gay, Associate Professor & Program Coordinator Digital Cinema at Southern Oregon University, and placed in partnership with the Oregon Shakespeare Festival​, Ashland Independent Film Festival, and Film Southern Oregon.

Two signs celebrate the filming locations near the City of Joseph and Wallowa Lake State Park.  These beautiful and dramatic Filming locations in Eastern Oregon have inspired Hollywood filmmakers all the way back to the silent movie era when the "Winds of Chance" (1925) shot close to Wallowa Lake but played-for the Canadian mountains in the gold rush era.  The Disney family adventure-comedy, "Homeward Bound: The Incredible Journey", starred two dogs and cat, and filmed in multiple locations close in the Wallowa area, including a picturesque ranch a few miles from Joseph, Mount Howard as well as multiple other locations in Oregon. These signs are a partnership with the Wallowa County Chamber of Commerce, the City of Joseph, Wallowa Lake State Park, and was paid for in part by a grant from Travel Oregon. 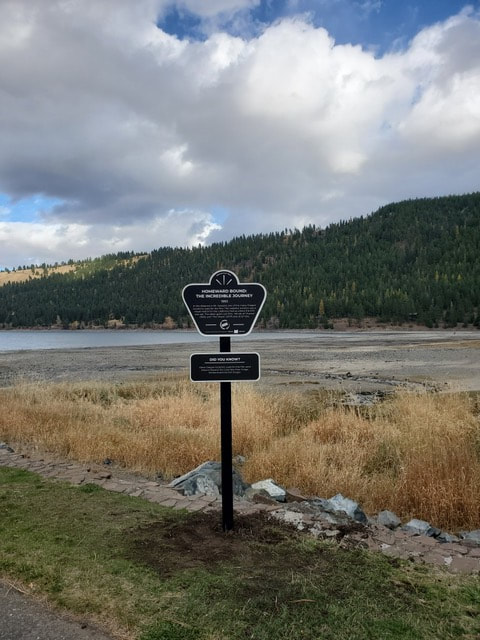 This sign celebrates the park as a filming location that has "starred" in many movies, from traditional westerns to more recent films such as "Wild" (2014).  The rock scrambling scenes filmed here at the park doubled for a location on the Pacific Crest Trail in California. This sign is a partnership with the Redmond Chamber of Commerce, the Central Oregon Visitors Association and Smith Rock State Park. The sign was paid for in part by a grant from Travel Oregon, with help from Redmond Chamber of Commerce and the Central Oregon Visitors Association.

The recently installed sign marks and celebrates locations in and around Toledo in the filming of “Sometimes A Great Notion” (1971), a motion picture based on the second novel by Oregon author Ken Kesey and published in 1964. The film was directed by Paul Newman, who also co-starred with Henry Fonda and Lee Remick. Partners include the Toledo Chamber of Commerce and the City of Toledo. It was paid for in part by a grant from Travel Oregon.

An historic marker will be formally unveiled as part of a full slate of activities in celebration of the film “Phoenix, Oregon” on Saturday, February 27, 2021 in downtown Klamath Falls with a simultaneous livestream.
​
Meeting directly with multiple community organizations throughout the fall, Klamath Film rallied letters of support and financial donations to cover the cost of the marker’s construction and confirm sufficient community support for the film’s recognition. Pledged support in financial donations or letters was received from Klamath Falls City Council, Klamath County Commissioners, Soroptimist International of Klamath, Klamath Falls Downtown Association (KFDA), Klamath Film and Discover Klamath, along with private citizen donations. This marker was also paid for in part by a grant from Travel Oregon. Oregon City sign honors the town’s starring role as a location in the popular teen drama, "Twilight."  It sits along the McLoughlin Promenade, overlooking the former Blue Heron paper mill where scenes from the iconic vampire movie were shot. The Mill has also been featured in "The Hunted" and "Grimm." The Works Progress Administration-era Promenade has itself been featured in scenes from "The Librarians" and "Trinkets."

Burns, St. Helens and Cottage Grove, recognizing iconic and varied  #OregonMade films like "Twilight," "Halloweentown," "Lean on Pete," "Animal House" and "The General" amongst many others.
​
Suggestions happily accepted: makeit@oregonmade.org